From H+Pedia
Jump to navigation Jump to search 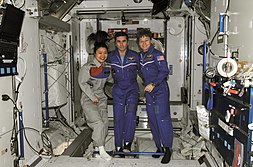 The Association of Spaceflight Professionals (ASP), initially incorporated as Astronauts for Hire, was established with the intention of training highly-qualified candidates as scientist-astronauts and making them available for hire as commercial crew. Research institutions, spaceflight companies and principal investigators are able to draw upon the cumulative experience and expertise of professional astronauts to carry out scientific experiments on suborbital and orbital space missions, rather than rely solely on their own personnel.[1][2]

Since founding as a 501(c)(3) nonprofit in the state of Florida on April 12, 2010,[3][4] the corps has partnered with leading government, corporate and academic providers to offer specialized astronaut training, from survival and egress to aerobatics and high-G centrifuge, to prepare its candidates for suborbital and orbital spaceflight missions.

As commercial astronauts, flight members are vetted through a highly-selective evaluation process modeled from the NASA Astronaut Corps, incorporating guidance and direction from a selection panel of veteran NASA astronauts, astronaut trainers, and experienced spaceflight professionals. Several members have interviewed as finalists in national astronaut candidate selection campaigns;[5][6][7][8] one has completed an orbital mission conducting scientific experiments aboard the International Space Station. South Korean Astronaut Soyeon Yi, the first Korean to fly in space, is an active member of the corps and serves on its board of directors.[9]

The corps numbers eighteen flight members, or commercial astronauts, with membership numbering more than 220 PhD-level scientists, researchers and engineers from nineteen countries around the world[10] drawn from backgrounds in the military, defense, science, medicine, aerospace and engineering communities with an extensive track record of research and development, payload testing and integration, mission planning and operations support for the space industry, including several experiments currently flying on the International Space Station.[11][12][13][14][15] Members contribute to spaceflight operations and scientific research at national space agencies, defense,[16] research, science and technology organizations, and have given inspirational talks around the globe.[17]

Flight members have lived, worked and trained together with NASA and international astronauts, as well as serving as astronaut instructors themselves—training both NASA astronauts and Astronaut Candidates in specialist areas such as Space Exploration Vehicles (SEV), Extravehicular Activity (EVA) and critical space mission operational tasks[18][19][20][21][22][23][24]

The NASA Commercial Crew program, with official industry partners Boeing and SpaceX, is ramping up to launch its first manned test flights in the second half of 2018. Once testing is complete, both NASA and commercial astronauts will use the spacecraft to access the International Space Station and commercial space stations currently under development from Axiom Space, Bigelow Aerospace and others.[47][48]